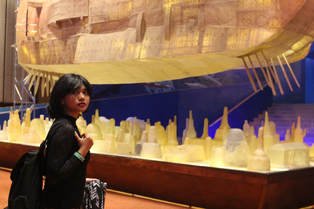 From 2015 to 2018, she became an assistant advisor at Executive Office of the President. She works in Deputy of monitoring and evaluating the priority program in field of energy to ensure the target of national priority programs accomplished. In addition, she also has the responsibility as supervisor of LAPOR!, a national complaint handling system and a member of TEPRA, Team for Evaluation and Supervision of Realization of State Budget and Revenue and Expenditure Budget.

From 2013 to 2015, she worked for Questionartes as her part time job. The organization created fine art exhibition around Bandung and Jakarta, such as Bandung Paper Art Show (Sribaduga Museum, Bandung), Paperium 2 (Dago Tea House, Bandung), and Paperium 3 Fiber to Paper (Textile Museum, Jakarta). As a public relations, she focused on connecting the exhibition event to the wider audience, and get the attention from media.

In 2014, Monitta and her friends creating Bhinneka Project, where they proceed the Indonesia multicultural ethnics into popular media like video games, comics, children's books, and so forth. She also actively creating visual novel projects such Nacira and Grinning Heart.

She have an Bachelor degree in Fine Arts from Bandung Institute of Technology. Colleagues know her as a creative person and fast paced worker. She is easy to work and collaborate in team to develop great ideas for problem solving.